Now that E3 2016 is over, we can all take a deep breath and take the time to analyze the enthralling goodness that enraptured our captivation for the past week. While I felt the overall showcase was rather underwhelming in comparison to last year’s E3, there were specific highlights that acted as this year’s saving grace and Sony in particular definitely brought the momentum back as they undoubtedly knocked it out of the park with their press conference. Aside from the excellent re-imagining of the Resident Evil series with Resident Evil VII, the invigorating multiplayer showcase of Battlefield 1, the intriguing permutations of Detroit: Become Human, the melancholic tranquility of The Last Guardian, and the visceral, albeit familiar, gameplay of Gears of War 4, these next five games were my personal favourite showcases at this year’s E3.

I’ve always liked the God of War series from a gameplay standpoint; it’s a very arcade-y hack n’ slash which relies heavily on visual spectacles and brutality. It was simply an engaging experience from a gameplay standpoint and while I loved the lore of its Greek mythology, its story and characters never resonated with me in the slightest. Kratos, in particular, is one of the worst video game characters of all time and is rendered to nothing more than angry tea kettle blowing off steam. He has the emotional depth equivalent to a cucumber, it’s simply non-existent. Arguably being the biggest surprise of Sony’s press conference – although a God of War set in Norse mythology has been rumored and leaked for quite some time – this rendition on the iconic Sony franchise is a complete overhaul in the best possible manner. This is how you breathe life into a stagnant franchise. Not only are we, ever so slightly, resonating emotionally with Kratos and is reticent relationship with his son, but we are also brought in much closer to Kratos in terms of gameplay. The fixed camera angle that is synonymous with the God of War series is gone and replaced with a traditional over the shoulder perspective – similar to that of The Last of Us. Actual combat seems to be more methodical and strategic, catering to a more meticulous nature as opposed to the series’ traditionally frantic, arcade-y style of combat. Tonally, the game clashes with its own roots as we’re to perceive Kratos as a struggling father, trying to teach his son the basics of survival, in hopes of him learning from his mistakes. Killing this time around bears significant weight; where you’d normally kill left right and center with no remorse in the original series, killing is done out of necessity for survival, serving as a lesson of sort for Kratos’ son and it’s handled in an appropriate manner. Seeing Kratos extend his arm out to his son in attempt to comfort him after his first kill is an excellent example of the game’s newly found maturity and how it properly handles its subject matter. The more open and explorative nature of the game has piqued my interest, and while it’s not necessarily an open world game per se, the game will feature certain sandbox-esque areas that are ripe with secrets waiting to be discovered. While not being categorized as a remake or a sequel, God of War is a new beginning for a beloved, but derivative, series that was in need of a revitalizing surge of new, innovative implementations.

Now that Naughty Dog has concluded their astounding Uncharted series, there is optimum opportunity for a new Sony flagship series and Guerilla Games has something great on the horizon – see what I did there. Horizon Zero Dawn simply looks more amazing, and my intrigue grows stronger with each newly released trailer and/or demo. It’s an admitted shame that the game has been delayed until February 2017 – but I see two silver linings stemming from this decision: the game will be a nice birthday present for myself and this delay is a sign that Guerilla want their new IP to, at the very least, meet the expectations that gamers have fostered over the past year. With a heavier analysis on passive gameplay mechanics – such as its world map, crafting system, and dialogue tree – while retaining its established fluid action, Horizon’s E3 2016 coverage has been nothing short of exhilarating. Aloy will be able to seize control of different mechanical mounts – which are aesthetically cooler than horses in almost every manner – and roam the vibrant plains of this lost world, soaking in the gorgeous rays. Specific creatures are found in a manner similar to the Far Cry series, where a creature’s location will be featured on the world map visually by its corresponding image or silhouette. The intense gameplay shown at Sony’s conference looks as responsive as ever and according to those who have played the actual E3 demo, it plays even better. The game thematically and creatively boasts provokingly innovative ideas, and with a promise that the experience will have an emotional resonance with many, it’s fairly hard to not be excited by Guerilla’s new IP. I simply cannot wait to roam the gorgeous outskirts of this beautiful new world and hunt down a gargantuan Thunderjaw.

3. South Park: The Fractured but Whole 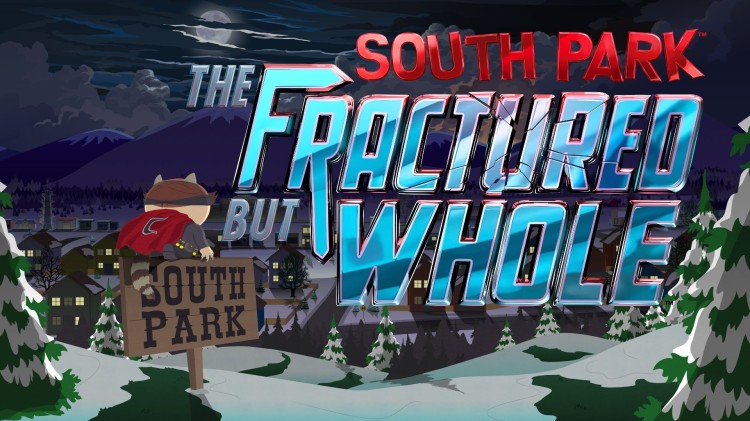 South Park: The Stick of Truth is one of the greatest RPGs in recent memory and is a textbook example of licensed work handled correctly. It was a riveting, bite-sized experience that impeccably matched the visual fidelity and overall quality of the show. It was to be a one-off experience that would allow us, in a sense, play an all new season of the iconic show – since the whole development ordeal was a leaving nightmare for South Park creators Matt Stone and Trey Parker – so any likeliness of a sequel seemed fairly unrealistic. Luckily we were all proven wrong and The Fractured but Whole is shaping up to be a worthy sequel that retains the renowned juvenile humor and its interactive turn-based battle system. Hilariously poking fun at Marvel’s recent success with their cinematic universe, The Fractured but Whole induces a civil war between the children of South Park over the phase structure of their own superhero universe. The Coon and friends’ story arc has always been personal favourite of mine so I have much to look forward to this December. Alongside the new thematic set up, The Fractured but Whole introduces a new grid based battle system to coincide with the existing turn based system, implementing an additional layer of strategy with distance and timing. I honestly hope that this sequel can live up to the brilliance of its older brother as I don’t want this game series to be remembered in history as a one hit wonder.

Spider-Man is my favourite super hero of all time and it’s safe to admit that we’ve all been burned by his treatment in both film and video games. We all witnessed the mediocrity that was The Amazing Spider-Man universe and his time in the interactive medium of gaming has been rendered to cheap movie tie-ins and repetitive nonsense with promising ideas. Not since the 2004 release of Spider-Man 2 have we seen the property handled with the amount of rightful respect it deserves. Easily the most pleasant surprise straight out of E3 2016, Insomniac Games has partnered up with Marvel to develop a PS4 exclusive Spider-Man game. Now this exquisite news excites me for multiple reasons; first off, Insomniac has been on an absolute roll as of late with the recent success of the Ratchet & Clank remake and the stylish Sunset Overdrive. Sunset Overdrive in particular is excellent proof that Insomniac can make an amazing open world game that handles traversal and navigation in such an impeccable manner – which are  key components in a great Spider-man game. Secondly, it has been reported that Sony, Insomniac, and Marvel are putting their all into this project as there are already talks of Spider-Man PS4 being the first entry in a new successful franchise. The new title will feature an all new original tale of an older Peter Parker and won’t be hindered by the unanimously known nature of his origin story or any tie-in to the upcoming and/or subsequent Spider-Man films. It’s simply a fresh slate for Spidey’s representation in video games, and everyone’s favourite webslinger is in dire need of a reboot of some sort. Lastly Insomniac has an amazing track record of making fun games with irresistible charm. Their two mascot franchises – Spyro the Dragon and Ratchet & Clank – are excellent templates for the light hearted and humorous nature of Spider-Man and their darkly emotional Resistance series is indication that they can write poignant stories when needed. Marvel has been handling the Spider-Man license in a relatively smart manner as of late – especially with Sony’s collaboration for Captain America: Civil War – so here’s hoping that their partnership with Sony and Insomniac is another smart and deliberate move that will replicate their current success and produce excellent results. Given the fact that their Spider-Man team is currently Insomniac’s biggest in development and judging by the excellent captured gameplay of the E3 2016 trailer, Insomniac’s Spider-Man project is onto a promising start.

1. The Legend of Zelda: Breath of the Wild

Breath of the Wild was undoubtedly my favourite showing at E3 2016; it is in every way a step in the right direction for the series and is the embodiment of how I would visualize a modern Zelda to be. Not only is its expanded approach to exploration a welcomed change of pace, catering to a traditional RPG sense of scale, but Breath of Wild boasts a minutia of gameplay integrations that are noticeably foreign to the series. As I previously mentioned, Breath of the Wild plucked popularized elements from the RPG genre and implemented them in an appropriate and tasteful manner. Link can collect a wide array of categorized loot – from different classes of weapons to different types of edible items – and not only does Link have the aforementioned versatility of accessible weapons to equip, but he can also equip different types of armor that will correspond to specific environment attributes such as temperature. Not to mention that there’s a newly introduced stamina bar that gauges Link’s capacity to sprint, unleash heavy attacks, and traverse the environment – almost every surface of Hyrule seems to be climbable. What makes Breath of the Wild truly special is still true to the core essence of The Legend of Zelda series: exploring this immersive world and discovering its tantalizing secrets; Breath of the Wild presents a new and expansive medium for us to do what we already love doing. Whether you decide to shield-surf your way down the mountainous slopes of the north, try to sneakily infiltrate a Bokoblin base – slowly sniping them off via your slick bow and assortment of arrows – use a Korok leaf to propel a wooden sail boat through Hyrule’s open waters and travel to uncharted locales, gather ingredients to experiment different combinations for recipes, or face off against the mechanized Guardians for an immense combat challenge, there’s always of interest occurring in this new iteration of Hyrule and each instance is a new story to tell. There’s still so much to talk about – I haven’t even mentioned the magical Runes, the time slowing abilities, or the sheer fact that the game can be completed without finishing the story – but a long story short, the game looks absolutely stunning and it’s the next grand leap for the Legend of Zelda series.

So that’s a wrap! There were honestly so many intriguing games to choose from this E3, so compiling  a list of five was no easy feat. What were your favourite showcases of E3 2016? Let me know in the comments!